A New Hero Has Emerged!!! 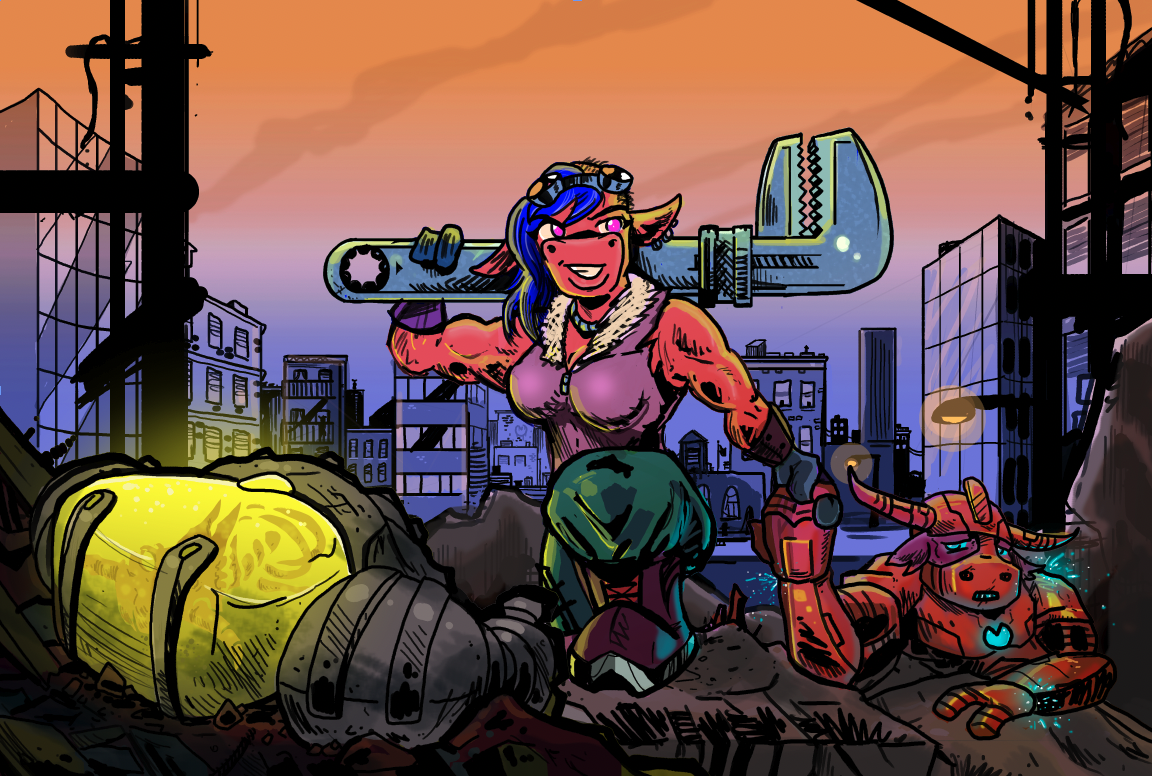 As the nuclear sunset began to wane, all looked bleak for Cattle Axe. Chernobull began to smirk as he knew he had the upper hoof. Nothing would stop him this time. Then… darkness.
Meanwhile as the sirens blared, and citizens evacuated. Only one calm and collected Bovine had no panic, no alarm, no hustle. Jazzmin looked across the rubble and saw nothing but opportunity and action. She always had a knack for building things, and now was an opportunity to show off her talents.
Grabbing her tools, she collected a few articles of debris and began assembling. Knowing precisely the right tool for every job this was gonna be a piece of cake.
Radiation shielding?

The most badass Bovine in the city?!

Jazzmin glanced in the reflection of her new creation and winked.
“Get your camera World! It’s time to introduce you, to Taurque!”
Arriving at ground zero on her homemade hoverboard, Taurque surveyed the zone. Cattle Axe was beginning to engage. Taurque sighed.
“Such a waste.”
She knew this was not going to end well. The radioactive particles emitted from Chernobull would eat right through Cattle Axes mystical Enchanted Armor.
Jazzmin looks at the camera mounted on her drone and quips, “It’s time to fry!”
Armed with a shield and her fathers Wrench, Taurque enters the fray. Chernobull’s blast ricochets off Taurque’s Makeshift Shield. She charges straight towards the Villainous Ticking Timebomb.
Caught off guard by the recklessness of her strategy, Chernobull is overcome.
This Badass DIPA may look cute and friendly, but with three different types of hops (Cashmere, Cryo Azacca and Vic Secret), it packs a punch that no one sees coming

!!
Make sure to look for Taurque in a store near you starting this week!!
Stores in Bold Are Receiving Taurque
Tuesday Jan. 28th – Cherry Hill North + South